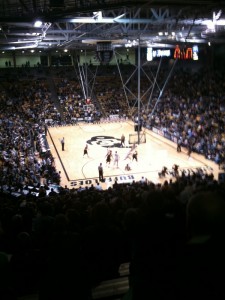 So as it turns out, Qwest Field, and the Seattle Seahawks, have been doing what most fans have already assumed which is overcharging for alcohol at stadium concession stands.

I don’t have all that much sympathy for the fan who is spending $7.50 on a domestic beer.  At those prices you are getting what you deserve. Most people know that stadium beers are a rip-off to begin with which is why so many football fans tailgate/drink too much before heading into the stadium.

Here’s an idea, if you wanted to satisfy the fans demand for booze while at the same time cut down on public intoxication/drunk driving, why not charge LESS for a beer? Think about it like this, if I’m going to a football game and I know that the beer at the concessions stand costs me less money than at a package store, I am going to wait to buy until I get into the stadium.  I am also going to make sure to get to my seat nice and early, which has been a problem for a lot of NFL teams this season (see: NY Jets) who have kicked-off in front half empty stadiums, presumably because people are still out drinking in the parking lots.

So under this proposal, stadiums sell a higher volume of beer (because it’s cheaper) WHILE lowering the risk of drunk driving/other debaucherous parking lot behavior (because fans are no longer stuffing their cars full of Bud Light pounders).

Pie in the sky? Perhaps. But consumers are no longer going to allow themselves to be taken advantage of by stadium concessions. Or will they…