Craig Robinson is the progenitor of Flip Flop Fly Ball, a blog dedicated to his love and appreciation for the game of baseball. His first baseball book, Flip Flop Fly Ball: An Infographic Baseball Adventure is in stores today. Craig is an Englishman living in Mexico, a story for a later date, and was nice enough to sit down with VMS to discuss his new book, Ichiro, and the universal language of baseball.

So Mexico huh? Sounds like the beginning of an Ernest Hemingway novel. Was the appeal of Mexican League baseball just too enticing for an expatriate like yourself to pass up or was it something simpler that drew you south of the border like say the tequila?

A bit of both. I’m British, and I was in Berlin during the 2009/10 and it was horribly cold and grey. I wanted to skip a winter and be somewhere warmer, and I had a couple of friends here, so gave it a go. It’s a great city. And the fact that there is baseball and soccer here is a massive bonus. 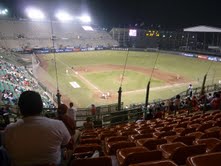 One of the things I like discussing is the accessibility of baseball and how people with limited exposure to the game find it so hard to comprehend. The reason I like your work on Flip Flop Fly Ball is because it has a way of translating the game of baseball into a universal language, something all people can understand. In the States, we have a crisis on our hands where fewer and fewer kids, especially from the inner city, are playing baseball, choosing instead to specialize in either football or basketball. In your estimation, what can be done in the US to attract more kids to the sport of baseball?

I’m not so sure. I never played as a child, but simple things to trim the excess time would be good in general, and that might help get rid of any perception that it’s a “boring” game. Properly making sure pitchers don’t take forever on the mound, stopping all the stepping out of the box, limiting the throws over to first, and IBBs only having to be one throw might help.

How do you explain to your non country of baseball acquaintances that a batter is not supposed to peer back at the catcher as he flashes the pitcher signs? And, taking it a step further, if that batter is to be caught “cheating”, on the very next pitch the pitcher will proceed to put a mid 90’s fastball right in the center of his ribs. It seems to me that this is one of the many nuances that makes baseball different from other sports. Do you think other sports, soccer for instance, have a way of regulating themselves like baseball? 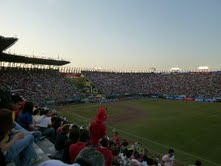 Not really. All the unwritten rules seem fairly singular to baseball. Like everyone barring, in would seem, FIFA, I abhor the diving, play-acting, and lack of honesty in soccer these days.

I’m sure you have been pestered with ideas for future charts and infographs so let me just bother you with one more: track the total distance the ball has traveled, from plate to base, on all the would be basestealers Pudge Rodriguez has thrown out during his major league career. Then compare that number to the other catching greats throughout MLB history. Who would you suppose tops that list?

I have no idea without looking it up, that’s a good idea, though.

In what ways will your new book Flip Flop Fly Ball, available in stores now, appeal to non baseball fans as much as your brethren in the country of baseball?

Well, most of the people I know here aren’t interested in baseball, and they still kinda like looking at the book. It’s colourful and neatly designed which I think is something a lot of people will like. The info, though, will be fairly baffling to a non-baseball fan. 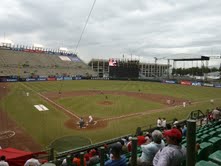 Lastly, your love affair with Ichiro. Please explain. I feel that many fans may now overlook his career accomplishments while he gradually withers away in the Pacific Northwest. If he were say a New York Yankee for the past decade, do you think he goes down as one of the 10 best hitters of all time? My favorite line about Ichiro is that if he had wanted to he could have averaged 30 HR’s and over 100 RBI a season for his entire career.

He’s simply a joy to watch from the moment he steps out of the dugout. His at-bats are never boring, and he’s a great defender. I lived near Seattle for a while, and it was great to sit in right field and watch him between batters. Even though you knew he was concentrating on the game, it kinda looks like he’s got other things to think about in those moments when he’s not required to think about baseball.

all views from Foro Sol courtesy of @flipflopflying