Your Honor, esteemed members of the Jury. I stand before you today on behalf of all long suffering New York Mets fans who wish to no longer sit idly by and watch their beloved baseball team struggle through yet another disappointing season. Something needs to be done to change the fortunes of this franchise and it is my duty today to present the case for innocent fans like Mr. Met, Jerry Seinfeld, and Michael “The Situation” Sorrentino.

The problem is not talent as the Mets have enough young starting pitching in the pipeline to contend in the NL East for years to come. Trading a few of those assets for a big time bat, cough-cough Giancarlo Stanton cough-cough Troy Tulowitzki cough-cough, and all of a sudden you’re maybe talking about the first World Series victory since 1986.

No, the real reason why the New York Mets stink is because of Citi Field. Now your Honor, I would be remiss if I didn’t at least acknowledge what a sensitive topic the Mets ballpark has become across the many media outlets in the Tri-State area and while there are a few radio/tv personalties that will remain nameless – cough-cough Michael Kay cough-cough – who suggest that the Mets players need to “suck it up” and stop looking for excuses. However, anyone who has watched the Mets play on a regular basis since they moved into Citi Field back in 2009 understands that the ballpark, as presently constructed, is preventing the New York Mets from becoming a winning baseball team.

Case in point, this past Saturday the then 21-25 Mets hosted the underperforming 18-31 Arizona Diamondbacks in an all together forgettable matchup between two cellar dwelling teams. The D-backs won by a final score of 3-2 and the primary reason why the Mets only managed to score 2 measly runs was Citi Field.

Look no further your Honor than the bottom of the 3rd inning, Mets already trailing 3-0. With 1 out and runners on 1st and 2nd, Curtis Granderson steps up to the plate and on a 1-0 count drills a 79 mph changeup from Josh Collmenter deep into the right center field gap. The crowd stands in unison fully expecting a game tying/momentum shifting/season saving 3-run blast off the bat of their free agent slugger when, as if it had run into the wall of smoke emanating from the Shake Shack fryolator, the ball plops down on the warning track and hops over the outfield fence. Ground rule double. Only the runner on 2nd base scores and after a Chris Young strike out and a Lucas Duda pop up , the Mets headed to the top of the 4th inning still trailing by two runs.

Ladies and Gentleman, to give you a sense of how devastating this very moment was to the Mets team and fans I present Exhibit A a highly scientific diagram demonstrating the impact of Citi Field on Granderson’s should have been home run from the 3rd inning of Saturday’s game vs Arizona. 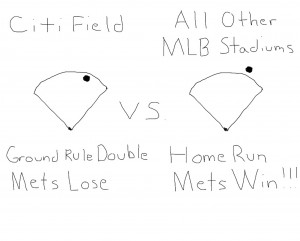 Clearly, Curtis Granderson did all he could to help his new team win. In the end it was his ballpark that let him, his teammates and the fans down. I now present to the court Exhibit B highlighting the Mets’ team emotions following this pivotal moment on Saturday. 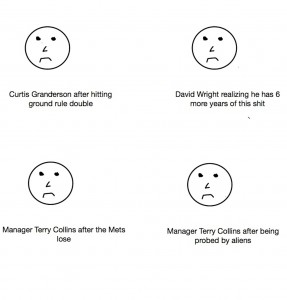 The defense will argue that Citi Field is not the reason the Mets are not a good baseball team and that the real reason they lost by a final score of 3-2 on Saturday was not Granderson’s ground rule double but rather Lucas Duda stranding 7 runners on base. Regardless of the facts, what the defense is overlooking is how damaging these losses have become to the collective psyche of Mets fans.

Here now is the final piece of evidence today labeled Exhibit S as in “sad” which shows the general lack of optimism amongst Mets fans compared to every other fan base in MLB. 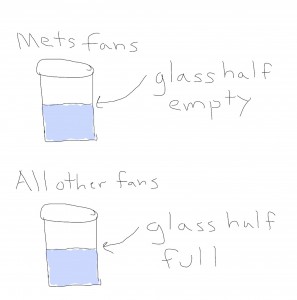 So as any reasonable human can attest, the problem with the Mets has nothing to do with the hitting coach or Jose Valverde. No, the reason the New York Mets lose much more than they win is because of Citi Field. Mets fans deserve much better your Honor.