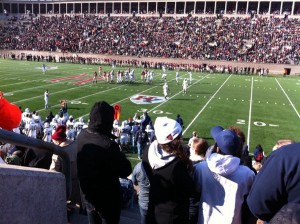 127 years is a long time.  That’s the number of times that the Harvard and Yale football teams have faced one another in what is known simply as “The Game”.  “The Game” probably carried more national weight back when these teams were competing for championships during the first half of the 20th century.  Now, Harvard/Yale is regarded as a nice tradition between two of America’s best private universities.

In Boston today, Harvard outlasted Yale  28-21, ending the Bulldogs chances to share the 2010 Ivy League championship.  Yale still holds a 65-54-8 series lead over the Crimson.  While “The Game” gets all the prestige, did you know  that “The Rivalry” between Lehigh and Lafayette, was played for the 146th time today?

Since both of these games no longer have much, if any, national relevance, do you think it’s time we give the titles “The Rivalry” and “The Game” to two different college football matchups?  Also, what’s the best rivalry game nickname?  My vote goes to “The Civil War” between Oregon and Oregon State.  Share your views.