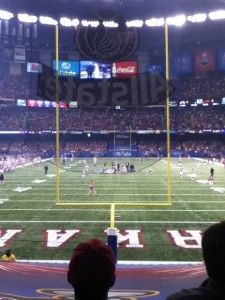 I have no intention of going all moral police on the OSU/tattoo parlor scandal.  As far as I’m concerned, this type of behavior goes on throughout the country.  It doesn’t make what Terrelle Pryor did right, but it does prove that the current system is broken.

I will not profess to have any idea how to fix the problem.  Pay all NCAA athletes a stipend beyond the scholarship?  Who knows.  Point is, as I was watching the Sugar Bowl last night I couldn’t help but think that a good portion of the players on the Superdome turf were receiving some sort of “extra benefits”. With the amount of money these programs/players generate for their universities, maybe paying athletes isn’t such a bad idea after all.

view of the Superdome courtesy of @pug_huh