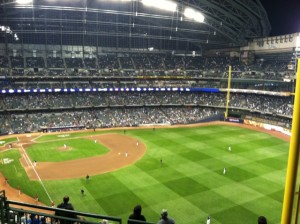 Time to hike up the pants well above the waist line and vent about an issue that only your grandparents care about.

And before I go all George Will on you, allow me to preface this latest rant by saying that I really really wanted to root for the Milwaukee Brewers in the NLCS. As many of you know, Wisconsin has become a home away from home for me and my family. Sconnies are some of the friendliest people on the face of the earth and I’m thrilled that they’ve been able to enjoy the recent succes of the Packers, Badgers, and now Brewers.

BUT, the Milwaukee Brewers have made the St. Louis Cardinals my sympathetic favorites to win the 2011 NLCS. That’s right, those surly, uber professional Cardinals led by their grumpy, non conformist manager Tony LaRussa are my personal preference to win the pennant and go to the World Series.

The proverbial straw that broke the camel’s back came last night in the bottom of the 5th inning when, with first base open and runners on 2nd and 3rd, the Cardinals, already up 7-2, basically pitched around Brewers slugger Prince Fielder. No one, least of all Fielder, should have been surprised by the non intentional intentional walk yet when he reached first base he proceeded to go through a series of hand gestures/secret signs/wild gesticulations that paid homage to nearly every single member of the Brewers dugout, his children, and Dave the Leinenkugel vendor working section 212. There was a point where I thought the first base umpire was going to call a delay of game on Fielder who was still motioning to various members of the crowd as the Cardinals pitcher toed the rubber.

Now normally, I’m all for a little modest exuberance in baseball. Too often the game gets labeled as slow, not exciting enough, and just out of touch with hyperactive American society in general. It’s a sport after all, and competition is meant to be fun. If you don’t enjoy the privilege and great honor of playing Major League baseball then you should probably find something else to do. But, in my opinion, the Milwaukee Brewers “beast mode” goes well beyond the restraints of basic baseball etiquette and good professional sportsmanship. When Yuniesky Betancourt, a very average shortstop having a solid postseason, nearly blows a blood vessel celebrating an RBI single, you know things have gone too far.

Perhaps I’m wrong. Perhaps this is just what young baseball fans want and if so, congrats to this Brewers team for growing the brand. And, to be fair, I’ve seen celebrations in Texas go on just as long. I just can’t imagine that there are a lot of people in Milwaukee or Arlington who approve of all these excessive celebrations. I’m sure they like the results, but most folks could probably do without Nyjer Morgan and his ill timed “f-bombs” after the Brewers clinched the NLDS over the Dbacks.

Or maybe it’s just me. And my grandfather.