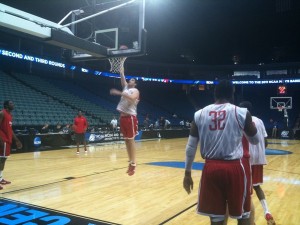 Why your dad likes Tulsa: Fair to say some dads don’t even know what state Tulsa is in. Most common incorrect guesses: 1) Texas 2) Nebraska 3) Saskatchewan. I mean no disrespect to the fine people of Oklahoma, your love for the OKC Thunder is proving that you can support a big time sports franchise. I do intend to imply that Tulsa seems like a rather random choice to host the NCAA tournament. I wonder how the NCAA chooses host cities. I’m guessing the location must have a sizable arena to fit a large crowd and a local university/athletic conference to sponsor the event but beyond that…

Signature Food/Drink: Tulsa seems like your quintessential steak and potato type destination. Of course, I associate any state referenced in Lonesome Dove as having good steer. Speaking of good steak from the Great Plains, I had an Omaha steak a few weeks ago, not terrible but definitely not worth the hype.  Perhaps the fact that they’re delivered frozen had something to do with the overall quality.

College Basketball History: Tulsa hasn’t hosted a NCAA tournament game since 1985. It also boasts the second smallest population, a little over 900K, of any 2011 host city. Smallest? Dayton, Ohio. If the city of Tulsa can successfully pull this weekend off and attract people to the arena/downtown area there is a chance the tourney could return to Oklahoma in the future but only after Cedar Rapids, Iowa and Portland, Maine get their fair shot first.

view from the BOK Center courtesy of @KCTVphotog_Bill