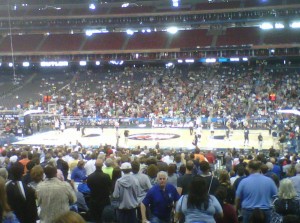 Why your dad likes Houston: Because every dad born during the Baby Boom wanted to be an astronaut when they were kids.  Thanks to JFK, my  dear old dad wanted to fly when he was younger only to have his dreams derailed due to poor eyesight. (Be aware that my dad also credits his poor eyesight for ending any chance he ever had of playing in the NFL.)

Signature Food/Drink: With its surprising proximity to the Gulf of Mexico, Houston has some of the finest seafood in the continental US. (Although since the BP disaster I am sure many local Houston eateries have been forced to adjust their menus.) For drinks, it’s tough to uncover an abundance of local craft brews so I am willing to bet that the people of the “Outer Loop” appreciate a good Bud Light while the fine, privileged folks of the “Inner Loop” enjoy themselves some sarsaparilla.

College Basketball History: The city of Houston has a fine tradition of college basketball. The University of Houston boasted one of the best, most prolific programs during the early 1980’s. In 1982-83, Phi Slamma Jamma made it all the way to the National Championship game only to be upset by Jim Valvano and the North Carolina State Wolfpack. That Houston Cougar team featured two of the NBA’s Top 50 players in Hakeem Olajuwon and Clyde Drexler.

Bracket Predictions: Butler over VCU. UConn over Kentucky. Butler over UConn. (And the final score won’t even come down to a Gordon Hayward missed half court shot.)