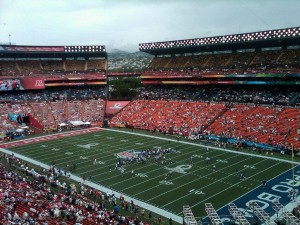 As Super Bowl week commences, and all of football envelops Dallas like a swarm of locusts, it’s important for those of us not heading down to Texas to take a second and appreciate how fortunate we will be to watch the big game from the comforts of our home environs. Here are three simple reasons why going to the Super Bowl is an overrated experience. (Editors note: I myself have never gone to a Super Bowl. If there is anyone out there who would like to offer me a ticket to the game I would be more than happy to take you up on the wonderful opportunity.)

Reason #1: The Home Entertainment System – It’s easier, more entertaining to watch the Super Bowl on television than from the stands. At home, in front of a flat screen, our greatest weapon is the remote control. Anyone who has ever been to a football game will tell you that with all the starting and stopping it’s impossible to maintain a consistent flow of on the field action. The Super Bowl, with all of its extra ad time/halftime theatrics, is regular season distraction multiplied by a factor of ten. At least at home we can switch channels or use the bathroom without having to wait in line.

Reason #2: The Crowd – It seems like the majority of Super Bowl tickets are usually dispersed amongst high profile corporate types and fringe fans who really don’t care about the game itself.  At home, you can choose who you want to watch the game with. At the game, you could be stuck next to Bill and Kevin from accounting who treat the whole Super Bowl experience as if it where some kind of extended “hall pass”. At least at home you can just simply not invite those friends who you know are going to drink too much too fast and then spend the entire second half talking on their cellphones.

Reason #3: Cost – I heard somewhere that the average household income in Wisconsin is something like 50K.  A trip to the Super Bowl in Dallas will probably cost somewhere in the neighborhood of $2500 per person. Using this arithmetic, for a husband and wife from Green Bay to go the the Super Bowl it is going to cost them roughly 10-15% of their annual income. That’s a whole lot of money which could have been spent on something much more practical like say a new snowmobile or perhaps an entire case of insect repellent.

And the list goes on and on.  Point is this, don’t feel too bad if you’re unable to make it to the big game, chances are you’ll have a much better time watching from your sofa.