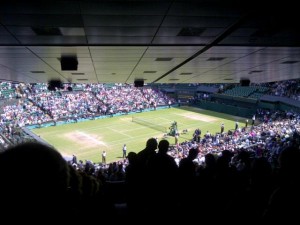 It’s been said plenty of times before, and with much greater eloquence and authority, but one of the things that makes Roger Federer such a fantastic, eternal champion is that he has always possessed a certain way of making everything he does on the tennis court look so damn easy. From his return of serve to his cross court forehand winners to the way he never looks out of breath even after chasing down volley after volley. There is even a disturbing consistency to the way he delicately brushes the hair from his eyes as if to show us all that we can only dream about being as in the moment as he has been over the course of his now 17 Grand Slam victories.

I exchanged a few messages with my buddy Chip who was in London during Sunday’s final and he said that the Britons weren’t all that disappointed by the end result given that the oddsmakers and daily rags had penciled down Federer as the heavy favorite over Andy Murray, the hometown hero from Highlands. Chip also went on to say that according to his Boston centric sports senses the reaction of Londoners after the 2012 Wimbledon final was very to similar to what happens in the Fens following a Red Sox regular season loss to the New York Yankees, an occurrence that I had to remind him was becoming much more frequent in 2012.* In simpler terms, Great Britain was proud of Murray for the way he battled through to the final and for this heartwarming, endearing post match speech but not all that surprised when the greatest of all time came out on top once again.

But before prattling on for far too long about a result and champion the context of which overwhelms most middling scribes and is better suited for a discussion amongst McEnroe’s, it’s much easier to instead focus our dwindling attention spans on something simpler like the behavior of the Wimbledon crowd and how it was predictably impossible for the fans at Centre Court to keep their personal allegiances secret. On this particular championship Sunday the vast majority of the crowd was pulling for the Brit Murray but there were also a healthy number of onlookers there to support Federer who is, with all due respect to Pete Sampras, arguably the greatest champion the London grass has ever seen.

So as the emotions of a 76 year old drought came within a few games/points/sets of reaching its crest, the partisan crowd managed to remain respectful and did not distract either player from the task at hand. This sort of restraint shown by the fans raises the all important question of why it is that a sport like tennis requires that the crowd maintain its silence while the point is being played yet there are other sports like baseball that do not ask for the same serenity? Is this because tennis is a much more difficult sport than baseball that it requires a much higher level of concentration or perhaps tennis players have been conditioned throughout the years to play without distraction? The easiest analogy to make is the art of bunting in baseball compared to the serve in tennis.

Arguing over which is the more difficult task to execute, the 120 mph serve or the sacrifice bunt, is both futile an unnecessary. Each requires more skill and precision than we mere mortals can even begin to fathom. A good serve, as with a sacrifice bunt, relies on not just speed but location as well. A hard serve is difficult to return only if placed properly. The same can be said about an effective sacrifice bunt. Depending on the situation a batter needs to direct the ball either down the first or third base line.** Just simply putting the ball in play does not guarantee that the batter will be able to advance the runner into scoring position just like hitting a 120mph serve does not necessarily result in an ace.

The other interesting parallel between these two skills is that both tennis and baseball players have a limited number of chances to accomplish their goal. Tennis players get two chances before committing a double fault while in baseball a hitter has two strikes to put a bunt in play, unless they’re being managed by a real old timer like my high school legion coach who would keep the bunt sign on throughout the at bat regardless of the count.***

So why is it that baseball players can handle the noise yet tennis players require such stupefying silence? The simple answer is history and tradition. Think about it this way, if there was no such thing as tennis etiquette and fans were allowed to make as much of a racket, no pun intended, as they wanted to eventually players would cease to be distracted by the noise. It just like basketball players adjusting to shoot free throws while staring at this guys face or Tiger Woods hitting a low cut 3 wood stinger with hundreds of fans snapping cell phone pictures.

But the rules and tradition of tennis do not allow for fans to interfere with the action. And it’s a good thing too because elite tennis players cannot handle the additional distraction. Take yesterday for example. What if some hooligan Andy Murray supporter wearing a Union Jack shirt with matching Dame Edna glasses were to have directed at Federer right as he was going into his ball toss a string of expletives that would even make EL James blush? For starters, the offending fan would have been thrown in the Tower of London to rot for all eternity alongside the ghosts of William Wallace and Oliver Cromwell. Secondly, due to the interruption Federer would have been thrown completely off his game and that laser like focus that has made him such a vaunted champion in the past would have been melted down to nothing more than a puddle of ineptitude that even Pippa**** woud have had a difficult time watching.  Because tennis is such a proper sport, and because no true athletes wants to be given an unfair advantage, Murray would have most likely conceded the point and even personally apologized to Roger for the poor behavior of the fans.

The reason why baseball fans don’t go silent just as the batter squares around is not because bunting is any less difficult than hitting a 120mph serve but rather because baseball players have been conditioned to perform through the distraction. In fact, it would probably be more off putting for major leaguers if the crowd did go silent during important moments of the game. Unless of course you are currently playing in Oakland.

*Before going ahead and accepting Chip’s analysis as the gospel please understand that he was drinking white wine while watching the championship at “Lady Di’s Place” which was either a reference to a former residence of the Princess of Whales or a gentleman’s club by Emirates Stadium.

**Back when Roberto Alomar was playing for those great Toronto Blue Jays teams in the early 90s, they would say that he would intentionally bunt the ball foul early in the count just to get the defense to shift out of position so that later in the at bat he would have more open space to put the ball in play.

***FYI, there is nothing more embarrassing as a baseball player than failing to get the bunt down. Close second is getting picked off second base.