The USGA has made it clear that there will be zero controversy at Pinehurst No.2 this week regarding the difference between native waste areas and bunkers. For those scoring at home, players are allowed to ground their club and remove loose impediments in waste areas ONLY. Doing so in a bunker costs strokes, just ask Dustin Johnson.

In an effort to make the differentiation simpler, each group at the U.S. Open will be assigned a walking rules official. And if that’s not enough, all bunkers will come equipped with rakes, waste areas will not. So, in other words, it’s anyone best guess and there will certainly be a few minor discrepancies over the next few days.

For all you armchair rules officials watching the U.S. Open from your basement coach, attached is a primer to help you recognize the difference between a waste area and a bunker. Put the USGA on speed dial because you never know when a little extra assistance is required. 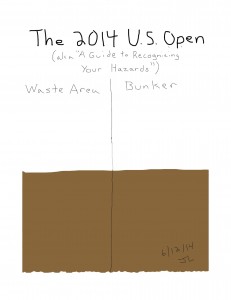