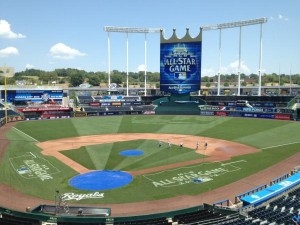 According to Commissioner Bud Selig MLB has never been healthier and while it’s easy to dispute this predictably obtuse claim that doesn’t mean that baseball did not enjoy itself an eventful and entertaining first half. Attendance is up across the country, there is an exciting crop of young talent making an immediate impact, and the Pittsburgh Pirates are 11 games over .500 for the first time since 1992.

But there are still certain improvements that could be made, especially to Tuesday night’s All-Star Game. A few years ago baseball decided to make the Midsummer Classic “count” for something by having the game determine home field in the World Series. Skeptics believe that this was not enough to raise the competitive level of the game and the change certainly hasn’t roused a significantly larger television audience. When you think about it, the ASG should be able to attract an enormous viewing audience especially considering that it’s the middle of July and there is absolutely nothing else on tv except for old Bones reruns and some new show called American Ninja Warrior.*

1) First pitch at 7pm instead of 8pm: Yeah, I understand this screws with West Coasties but you’ve been spoiled by 10AM NFL games for long enough now that it’s time for those of us back East to enjoy a primetime game in its entirety instead of falling asleep during the 7th inning stretch.

Personally I don’t buy all that crap about how we can’t expect the younger generation to appreciate America’s Pastime if the ASG is on well past their bedtime. Please. It’s summer. School has been out for weeks now and most kids who would even care to watch the game in the first place are already so hyped up on Red Bull and Arizona Iced Tea** that they’re going to be up well past their bedtimes anyway.

No, I want to the game to be moved to 7PM for parents of young children like myself who for 17 months now have found it quite difficult to stay up past 10PM because I’m either A) too tired from chasing around a 2.5 foot little person who finds a way to bump his head against the corner of every table in our house at least 30 times a day and who also happens to wet/crap his pants with the same frequency or B) already asleep on the coach. If the game were to start at 7 instead of 8 then there is a good chance I make it all the way to the end when they hold that awkward MVP ceremony where some Chevy exec gives away a fully loaded Corvette to a multimillionaire who probably already has a stable of high priced automobiles in the garage.

2) Eliminate the managers: Like most adults, coaches just end up screwing things up anyway. Want recent proof? Look no further than how Tony La Russa totally botched the NL starting pitcher decision by choosing Matt Cain over RA Dickey. No offense to Cain but RA Dickey needs to start this game. He’s a 37 year old knuckleballer with a 12-1 record and 2.40 ERA who is one of the main reason why the NY Mets continue to outperform all expectations and who also happens to be such a crazy Star Wars fanatic that he named his family minivan the Millenium Falcon. Has a knuckleballer ever started an ASG before? Take La Russa out of the picture and I guarantee the players pick Dickey over Cain.

And who wouldn’t want to follow along as a hidden camera records the goings on in the clubhouse as the players debate their starting lineups and batting orders? When I envision an ASG clubhouse without coaches and managers I see a surreal world that is equal parts Lord Of The Flies, ‘Keeping Up With The Kardashians’, and 12 Angry Men. And networks like Fox love reality tv because it costs nothing to produce and the ratings are usually solid. Throw a little Liev Schreiber narration in there and you’ve got yourself a 1/2 hour pre game show that people would much rather watch instead of a 90 minute televised intervention between George Brett and Tim McClelland hosted by Jim Gray.

The only question is, who holds the conch? If MLB is really going to ask each clubhouse to make these types of crucial decisions then one player on each side must emerge as the Henry Fonda type leader, someone with an understated charisma and humility who is also able to earn the respect of his peers. My vote in the AL goes to Curtis Granderson who just seems like the type of well grounded individual (his parents are both teachers after all) that would be able to take command of the room. For the NL team I’ll go with Buster Posey if for no other reason than he’s a catcher and those guys usually make the best leaders anyway.

3) Unlimited reentry for players in the starting lineup: No offense to Asdrubal Crabrera, who is a deserving All-Star, but the fine folks of Kauffman Stadium want to see as much of Derek Jeter as possible. By allowing Carbrera to pinch hit and then have Jeter reenter in the bottom of the inning gives fans the opportunity to see their favorite players determining the final outcome of the game.

I’m all for keeping it where every MLB team is represented by at least one player but that shouldn’t mean that all reserves see a significant amount of time on the field. This year is different because there are several ASG reserves, like Mike Trout and Bryce Harper, that everyone wants to see get several at bats.

In the end, we’ll all probably be watching the MLB All-Star game but mostly because ‘American Ninja Warrior’ airs on Monday nights.

*No, seriously. Look it up. This is an actual show on network TV. I’ll be sorely disappointed if it weren’t a half hour montage dedicated to old Chris Farley SNL highlights.

** Someday soon scientists are going to reveal that too many energy drinks make you sterile which is going to be a real shame for extreme sport athletes as well as the actors in those bargain basement 5 Hour Energy commercials.