American sports fans are quick to criticize soccer players for flopping when in reality players in other popular sports in this country are just as guilt of embellishing. The NBA Finals concluded earlier this week and that series between the Heat and the Spurs included some of the most notorious floppers in professional basketball. LeBron James is the best basketball player and the world and has been known to exaggerate even the slightest bit of contact. Granted, it takes the payload of Mack truck to alter James’ direction as he bulls his way to the basket but still, flopping is not a foreign act in hoops.

Same thing in professional hockey. Heck the NHL has a penalty for embellishment which was called several times during this year’s Stanley Cup playoffs, most famously when Tomas Plekanec of the Montreal Canadiens faked a stick to the face during their series vs the New York Rangers. Luckily, the referees called his bluff and the Rangers scored on the ensuing power play.

And the list of sports goes on and on. Baseball players have been known to make up the occasional hit by a pitch. Even Derek Jeter, perhaps the sacred cow of unwritten baseball rules, was guilty of the aforementioned infraction a few years back. And before you say that American football is different, haven’t we all seen a punter selling being run into by a hard charging defender only to have our suspicions confirmed when the replay reveals zero contact?

The point is not to make light of all the flopping taking place during this World Cup and, in fairness, there is a lot of it, but rather to make it clear that this is not just a soccer problem. The one main difference between soccer and other sports is that in soccer, flopping is much more tolerated/part of the game. In fact, there is such a long history of embellishing in soccer that it has morphed into an art form. Everything about Neymar’s game is beautiful/graceful. Even the way he takes a dive. Same thing with Ronaldo. Heck you can even appreciate the style with which Clint Dempsey fakes an injury. (Note: no need to embellish when having your nose broken by a flying kung fu kick to the face.)

So, enjoy the World Cup without worrying about all the flopping. It’s happening in other sports too. 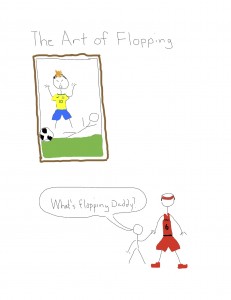